Cycle Touring: Ocean to Alps – a 5 Day Self Sufficient Ride

The Alps 2 Ocean Cycle Trail is New Zealand in all its colour and beauty – from our highest mountains, past great lakes and rivers, and down to the ocean. Suitable for all ages, the 9 section bike trail is an easy to intermediate grade, linking the Southern Alps to the Pacific Ocean.

Together with our friends, Alice and Jeremy we organised to spend our Christmas holiday completing the Alps to Ocean in reverse. Predominately as we had heard the views were better and it would be slightly more challenging going uphill. We began late afternoon on the 27th December, boarding the Intercity bus from the Christchurch Bus Interchange to Oamaru. We arrived in Oamaru at sundown and were keen to set up the tent as quickly as possible to avoid needing to bring out the flashlight. The Oamaru campground is right next to the Blue Penguin Colony and as we were arriving the penguins were coming ashore to their nest under the main kitchen facility, which was special. More importantly after all the talk and prep, we can’t wait to get on the road tomorrow!

All in we expect to do somewhere around 280kms in the next five days with around a 600m elevation across a range of terrain. Next stop Duntroon, riding across generally compact gravel trail with tiny gradients and lots of green pastures full of cows. After lunch at a well placed picnic table we ride alongside large limestone escarpments known as the Elephant Clay Cliffs which look stunning in the sunlight. There are a few interesting stops along the way including a walk up to Maori Rock drawings. Duntroon, probably a place not often visited for it’s lack of amenities is actually quite a quirky place if you care for a walk including a fossil museum and an eclectic mix of statues.

Say Hi to our riders and their setups:
Jeremy rides a Surly Long Haul Trucker with 26×1.75” touring tyres. Running a 3×9 gear setup with bar end shifters and cantilever brakes.

Both Alice and Jeremy fit all their gear in their Ortlieb double roller panniers and an Ortlieb handlebar bag, including their MSR tent, inflatable single mattress, multi fuel camping stove, pot, eating equipment and 1 change of clothing. The petrol canister for cooking fits into the bottle cage, so Jeremy has that mounted on a 3rd cage installed on the underside of the downtube.

I (Ken) am riding one of our hardtail hire bikes, a Cube Attention. It has 2×10 Deore XT setup, 29×2.1” Schwalbe Smart Sam tyres, Basil Miles double pannier for sleeping and cooking equipment while Charlotte carries the food. Our two person Big Agnes Fly Creek UL Backpacking tent is strapped to my flat handlebars and a Roadrunner saddlebag to carry clothing. We used a MSI pocket rocket for cooking. More on that later. 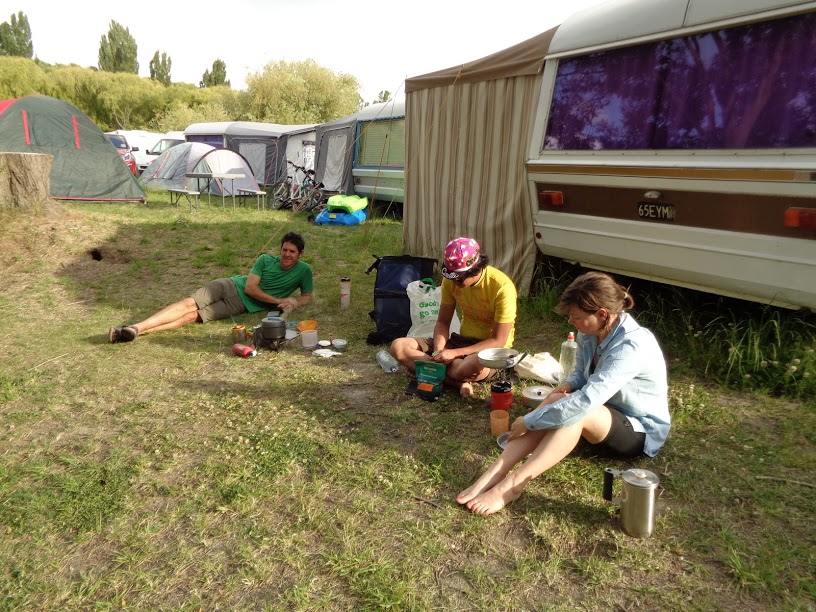 A sheltered dinner behind a caravan.

Day 2 started with a mild early morning riding through the wetlands before hunkering down against a 40km hot-head wind riding adjacent to the lakes from mid-day. Headwinds just suck all the energy out of you and it makes it harder to just ride to enjoy the scenery. 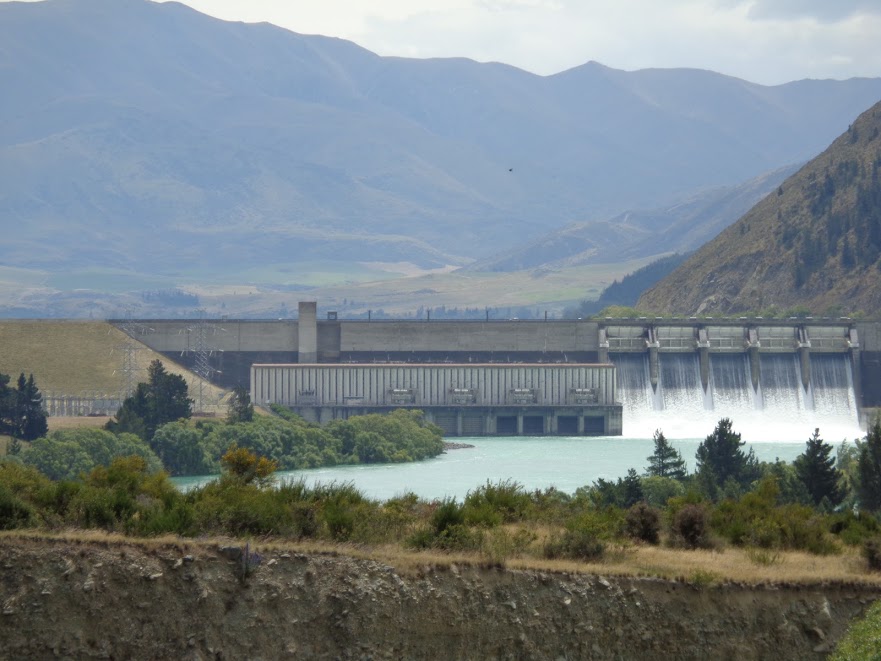 Cooking: An MSI Pocket rocket is the outdoor camping stove for getting a flame going as quickly as humanly possible. It’s fitted with an in-built lighter and a screw on style gas canister. It’s small, light and windproof which makes it great for boiling water or hot drinks like coffee in our Stanley percolator. It gets tricky however trying to slow cook as the flame is concentrated. If using this type of cooker it’s best to plan meals accordingly and avoid slow cooking things like risotto.

The multi-fuel cooker goes a long way with the fuel making it ideal for long trips. Set-up and usage isn’t very complicated but there are more details to look out for than say the pocket rocket. Other benefits include a wide flame for slower cooking and fuel shaped like a bottle means you can carry it in a water bottle cage.

Set to be another hot, long day with the biggest climb we made sure we were on our bikes by 8am to smash out a 200m climb over the Otematata saddle in the crisp, still part of the day. We entered the most technical part of the trip as we crossed the Ahuriri Conservation Park into the Ruataniwha Conservation Park along a 4×4 track and later single track to the Tarnbrae summit at 900m. The way to the top is laden with gravel of various grades, winding paths, false summits and the sun beating on down rather mercilessly. 2.1 Smart Sam tyres were slightly too big in certain sections along this singletrack but the whole MTB set up finally had its payoff going downhill into Lake Ohau! If you were to stay around Lake Ohau and did a few shorter day rides with the MTB it’ll probably be worth taking it on the journey but at the end of the day a gravel or touring bike setup is favoured for the A2O trail. 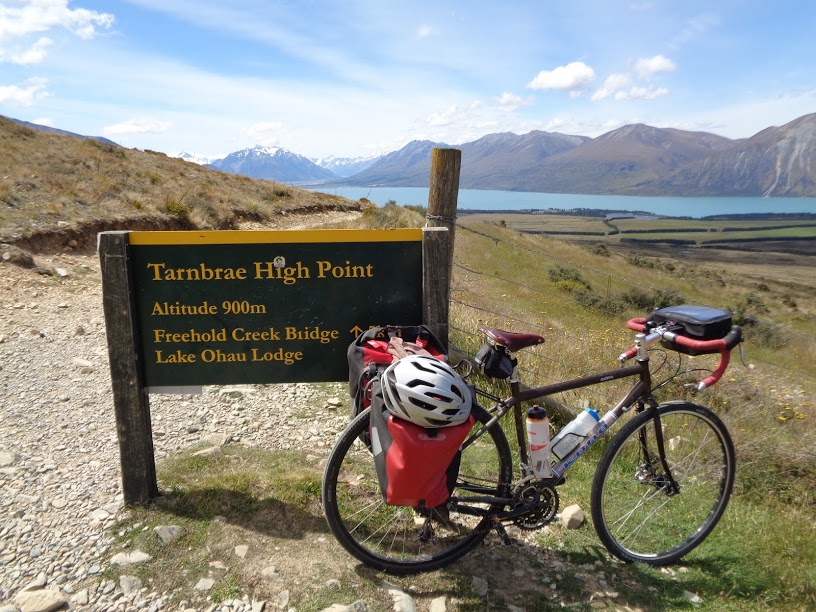 The highest point of the ride at 900m with views to Lake Ohau.

Fairly quick day the ride was a great change on the previous two days as well as giving us enough time to setup camp for NYE. An offroad path wraps around the Lake Ohau foreshore. The views across to Ben Ohau and Mt Cook as well as the native plants life are really special and one of our favourite areas of the trip. Once away from the lake the Ohau Canal take you towards Twizel. We made it to Twizel just after mid-day and set-up camp at the Ruataniwha Lake fairly quickly. We had a refreshing swim in the lake and treated ourselves to a NYE Thai dinner in town. Happy New Year everyone!

Sidenote: We made a quick stop at Loch Cameron which was suggested as one of the top swimming spots in the area. I’m sorry to report that Loch Cameron no longer deserves that reputation, not a fault of its own, but unfortunately too many people do not treat natural places with enough respect, despite the no dogs sign at the entrance, dog (or perhaps even larger beasts) excrement abound. Please help keep New Zealand clean and pristine for the people of today and tomorrow.

Highlight: Waking up to the sun rising over Ben Ohau and the lake at the quiet lupin filled DOC campground. We are so lucky to have these resources available to us Free of charge. Please make a donation to DOC to ensure these places remain if you are in a position too.
Campsite: Ruataniwha Lake Holiday Park  $20pp (Full facilities)
Distance: 38km Easy

Last day of the ride and we’re taking the alternative route to Tekapo instead of going north to Braemar Station. The trail starts across the Pukaki flats through pine forest to the Mt Cook Salmon shop where we picked up a treat for our sandwiches. You could see Aoraki in the distance, but also at the same time an ominous streak of dark clouds on the horizon. At first we thought we were about to expect some rough weather, but it soon became clear that is event is no mundane weather event. This is the smoke arriving from the fires in Australia making their effects known 4000kms away. By mid-day, visibility has drastically been reduced and any hopes of seeing the horizon or the mountains were out of reach. This made us sad to think 2020 was starting with another environmental disaster, but also makes it very clear that what we do at Action Bicycle Club is more urgent than ever. The burning of fossil fuels have to be dramatically reduced to just the essentials, ride a bike if you can, you can even have an amazing holiday on bike with great friends, the world will be better for it!

Bike touring is a truly magnificent way to see the country, unlike any other (perhaps tramping). You see so many more parts of the country you wouldn’t usually see. Are much closer to nature, and find out so much more about your mental and physical ability. It’s no walk in the park but completing each day and ultimately the whole trip releases so many endorphins and feels so amazing you can’t wait to do it again. 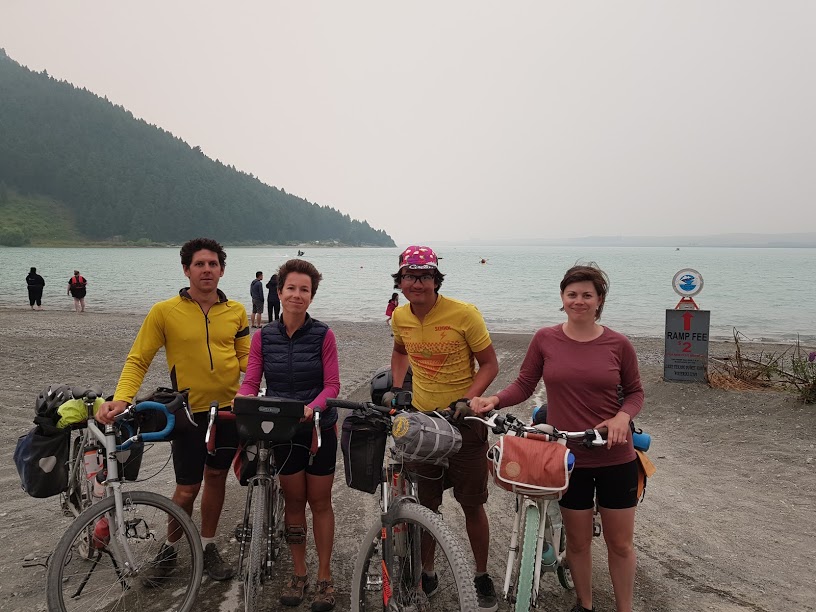 5 of the Best Cycling Trails in Christchurch

Goodordering: An interview with Jacqui Ma