Check out those smiles! 100 donuts, 17L coffee and plenty more happy cyclists starting the day with a bang. You guys rock! #gobybikechch

After such a successful breakfast in February I was itching to run a winter edition of Go By Bike Breakfast as cyclist need all the encouragement they can get on frosty Christchurch mornings! I locked in the first Wednesday of June as the event date and roped in my go-to cycling buddies from Spokes Canterbury, Generation Zero and Cycle Solutions to help with the organisation.

Ed from The Sailors Son, Action Bicycle Club’s neighbour, fellow bikes and coffee enthusiast and all round generous guy had the coffee taken care of. When I asked him about how donuts paired with coffee his response confirmed that, with Grizzly Bagel onboard this breakfast was going to be a hit. Now we just needed the cyclists to know about it. 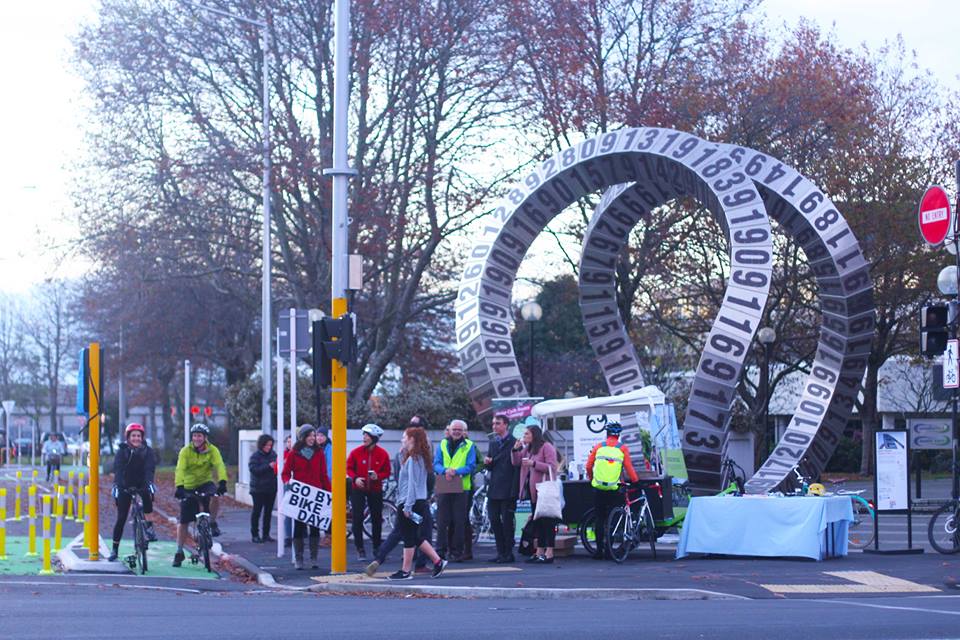 We parked up on St Asaph Street and Madras Street catching people coming from the South and East.

To keep proving a point that people do cycle in Christchurch and we need safe facilities to support them we were really keen to make this event bigger and better than the last. James and Simon from RDU were all for being involved and came up with a quirky ad that aired across the local airwaves for two weeks leading up to the event. James also talked about the event in every spare radio moment he had. James, you win the prize for number 1 fan. Thank you. 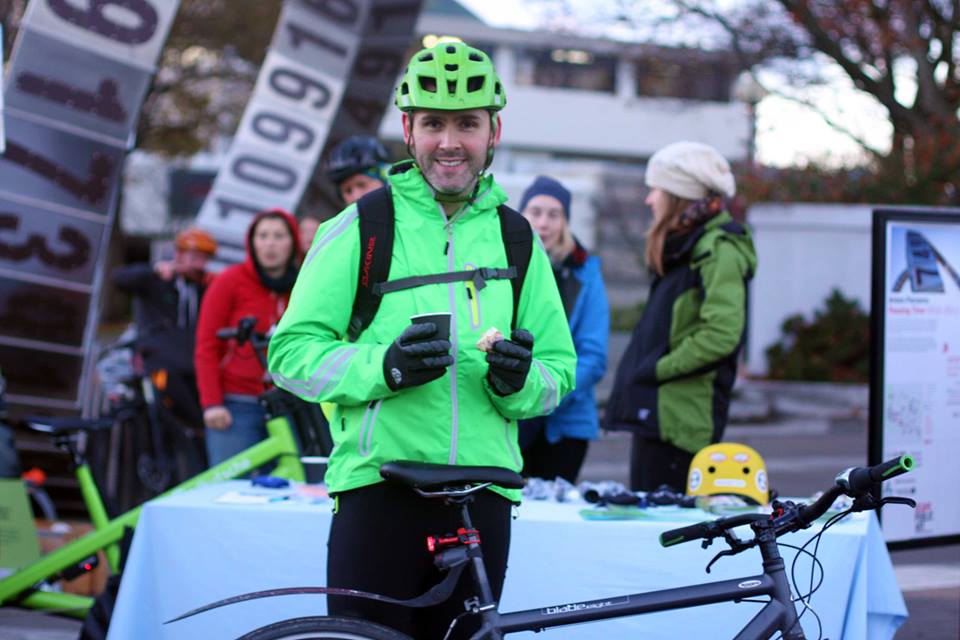 The coffee and donuts were a perfect match.

On the morning of we parked up on the corner of St Asaph Street and Madras Street, right next to the high-use separated cycleway. We held up posters and encouraged cyclists to pull over. We were surprised at the amount of riders stopping in at 7am and knew by 8.30am we would have a sell out.

What I love about Christchurch cyclists is the variety. People were stopping in on electric bikes, we had fixed gear commuters and roadies to elegant ladies on their step-thu. Some of us were especially impressed with City Councillor Mike Davidson; perfectly suited up and still riding a bike. It shows that cycling is really for anyone. 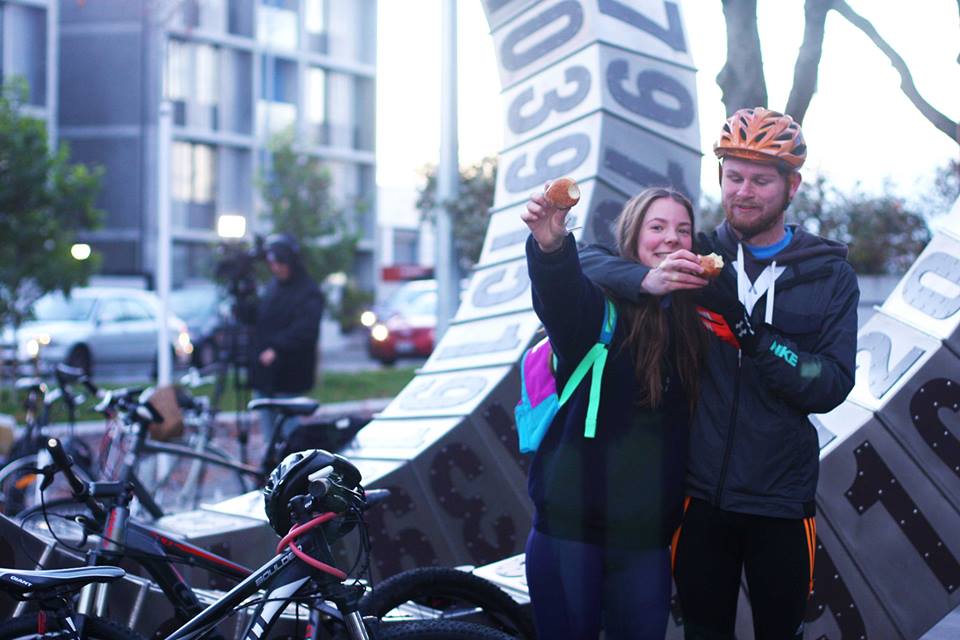 Two happy cyclists with their donuts

I met a girl crossing at the lights on Madras Street. It was her second day on a bike in Christchurch and she was on her way to her new job, which she was running late for. She was curious as to why we were giving out free coffee and donuts on the side of the road. “It’s for you” I said. “Just making your cycle to work today an enjoyable one.”

And at the end of the day that’s what it’s all about. Making our city that little bit more enjoyable. To give people a reason to step outside their comfort zone. To have new experience and to have FUN. One rider hit the nail on the head with her comment on the event Facebook page later in the day “I loved the donuts and coffee and meeting other cyclists!!

Thanks so much to all involved! 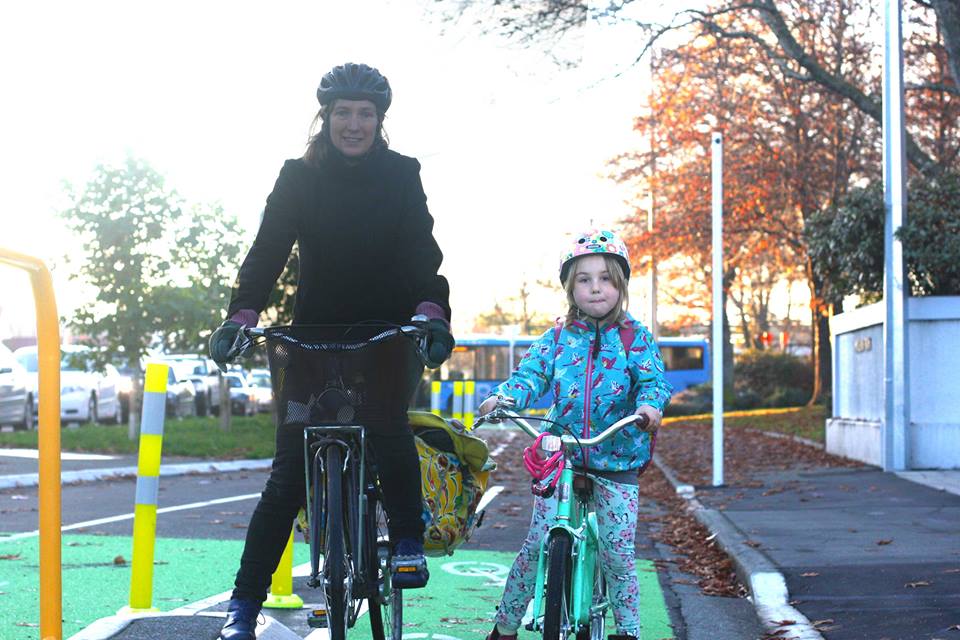 We even had a little donut fan join us.

For the middle of winter 100 donuts and 17L of coffee were in the bellies of 20% more happy cyclists than our February edition and all that were involved are already itching to do another. Stay tuned for Spring!

Side note: We knew that not every cyclist could or would stop and we were keen to get an idea of how many people were out cycling that morning. In the hour and a half we were handing out coffee we counted 300 cyclists pass through the St Asaph, Madras and High Street intersection.

Charlotte is a Creative Wheel at Action Bicycle Club – She believes bikes are like handbags. A woman can never have too many. She wants to see more everyday women on bikes and enjoys bringing out the good vibes of riding a bike in Christchurch.